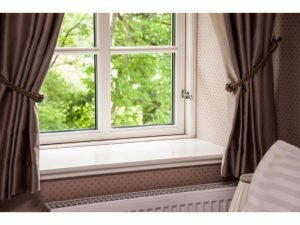 Thanks so much for visiting us on the web. On this site, you will find all of the information that you need about our company. This page was intended to give you a little background about who we are and why we do what we do. Sit back and enjoy a little story time, and if you have any questions, please do not hesitate to get in touch with us!

It all started as a romance. Well, sort of. Glenn Howard, our company's founder, was a strapping young lad putting himself through college in the big city of Chicago. He had great plans to be a businessman someday, and he knew that by washing windows at his after school job, he would be able to fund his academic endeavors. However, while he was at this job, he happened to clean the windows of a lovely house in Lincoln Park. In this house lived a girl  by the name of Jenny who was about the same age as he was. He started to get to know her over the summer, and soon enough, they fell in love with each other. However, this was doomed from the start, as Jenny was going to school in New York. However, the two remained together.

After Glenn finished school, he thought he would be done washing windows forever. However, his boss in Chicago told him about a job in New York that involved helping run a small maintenance company. Soon enough, Glenn was reunited with his love (and eventually wife), Jenny. He continued to wash windows and work his way up the company ladder (no pun intended) until he was the owner of the company. Since then, he has named it Howard's Window Cleaning, and that is our name.